The Future of the Electronic Security Industry

In every article I write for the journals we publish and in every idea I share, my most important material has been my travels and the experiences I have gained during them.

In fact, I can ask the unsolvable question “who knows much, the one who travels or the one who reads?” to begin the article. I could not support the either party until now. In fact, my answer is like the answers of others:

“A mixture of the both in proper proportions”

We regularly follow the latest developments regarding the industries subject to the exhibitions we organize. Therefore, we need to read continuously. We get the opportunity to update the information we acquire from regular reading during office studies practically and on-site during our journeys.

However, some of the meetings I had during the exhibition helped me better understand what was happening and would happen in the industry. The most important one of them was the meeting with the CEO/General Manager of the company which organized the exhibition. The second one was the meeting I had with the founder and owner/manager of Secutech, which is globally one of the most famous security exhibitions organized in Taiwan, and a&s International, the biggest security journal of the world. Both of them are my close friends, and my Taiwanese colleague has enriched the exhibition with SMA-Home over the last two years.  My Chinese colleague stated that they would add the subject of Smart Home to the exhibition to be held 2 years later.

This information and the details mentioned after that were the most important data to anticipate and interpret the future of the industry. However, allow me to share my pride at first. As Marmara Fair Organization, we planned to add the subject of Smart Home to ISAF Exhibition 6 years ago, and we did so in the year 2011. I am proud of the company at which I am a manager for such a successful anticipation skill to foresee and interpret the direction of the industry.

Because, the most important task of an exhibition organizer is to foresee the trend of the industry, and plan the exhibition accordingly. Seeing that our exhibition, which we have structured based on the prediction we made 6 years ago, precedes the biggest security exhibitions the world, the exhibition of the largest manufacturer countries in the world which can be regarded as the center of these technologies.

Yes, a significant change is beginning in the Security industry…!

Rather than a product based change, this change will be a transformation in which the integration of all the systems will be come into prominence. Up till today, we have been stating our ideas both verbally and in written form regarding the Integration in Security. Now, this is becoming an absolute must.

It is a fact known by everyone who follows the order of the day that we have entered the period of Industry 4.0 in the world. Moreover, we see the abbreviation IoT (Internet of Things) in every place where there is technology. In our day, a time in which such important changes are taking place, the Security industry cannot be expected to stay away from these changes. Further, the Security industry is one of the industry groups located at the center of this change.

In this period, which is described as the new era, new facilities and even all the renewed buildings and facilities are equipped with smart systems. All the product groups covered by the security industry to a large extent form the most important part of these smart systems. Beginning from access to buildings to elevators (if any), from access cards identifying the floors to which elevators can go to the opening of the doors inside offices, from people who are authorized to access certain sections to the time they spend there, from when certain lightings will be activated to monitoring extraordinary movements… I have written the systems coming to my mind at a second; there is no need to define the product groups included in these systems and their details. I am sure that all of you can add a few items more without any difficulty.

Each new period and change ends negatively for some, while they offer new opportunities for some others who observe the situation well. As I have stated above, a good exhibition organizer needs to analyze the industries for which he/she organizes exhibitions, and interpret the future well. Otherwise, that means he/she cannot do his/her job properly. We have already given the first signs of this with the transformation we carried into effect in 2011.

Now, we lay stress on the fact that the new period has come and that it is an absolute must to switch to this period. 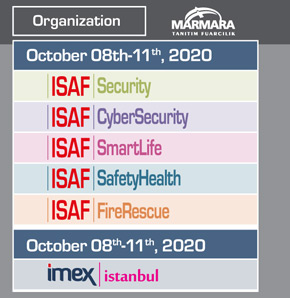